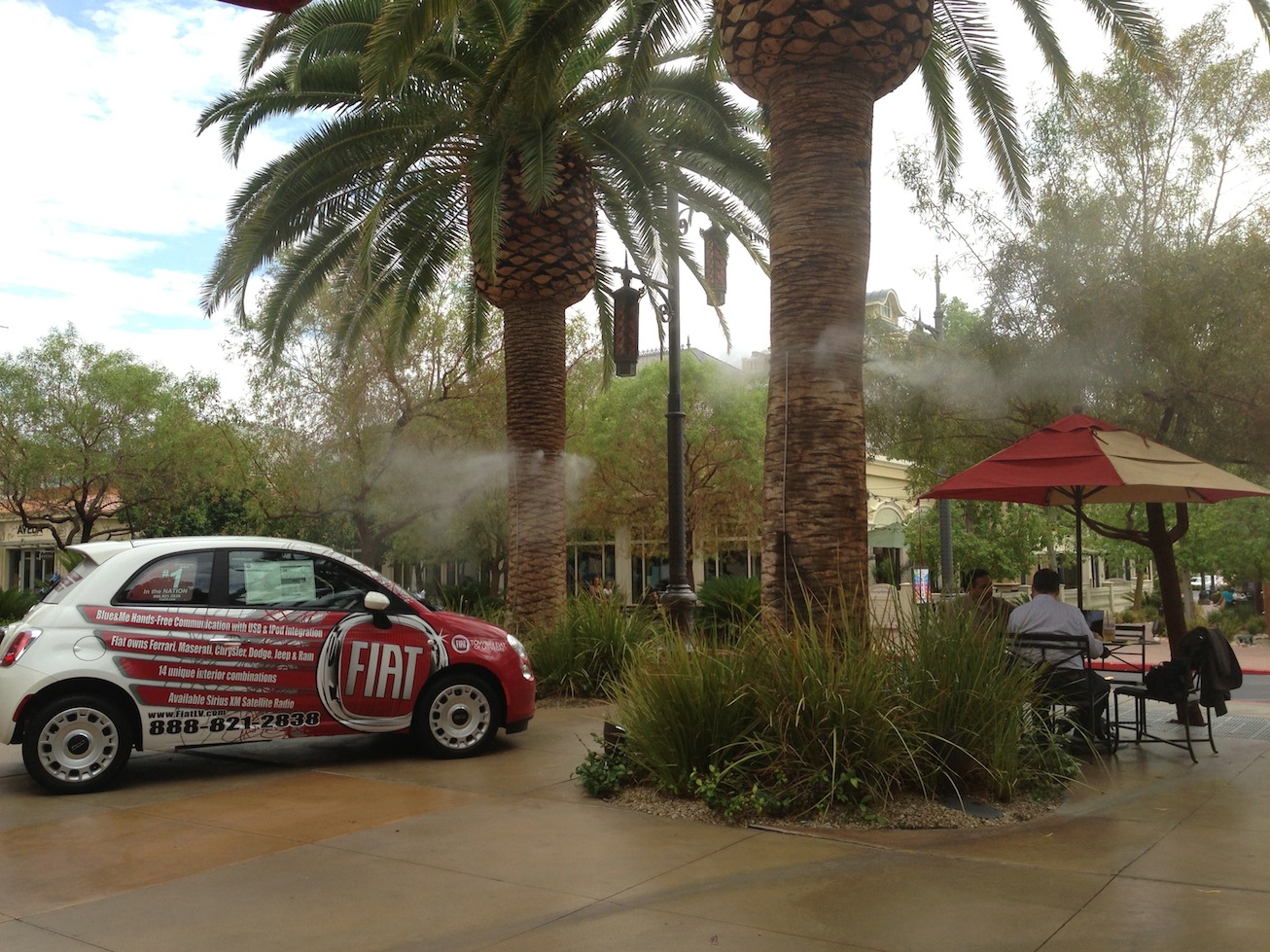 Around Vegas on a Bus

So far today I have taken six buses up and down Las Vegas Boulevard (the centre of which is the Strip).  When visiting a city I don’t know, I like to see them by bus as you cover a lot of ground without having to walk miles and miles (I must have covered 30 miles today)—especially in the afternoon heat, which is currently in the mid-30s, but in the direct sunlight it has to be pushing 40 (praise God for air conditioned buses and hotel rooms!).

My first visit was to the Apple Store, to get the screen fixed.  It is so badly damaged however, it cannot be mended, so I have to replace it.  The problem is, you can’t replace a European iPhone under warranty in the USA and Canada!  So I have put some selotape over the corner, and fingers crossed it doesn’t stop working for the next three weeks (it is my Sat Nav for 3000+ miles of driving).

The picture above was taken outside the coffee shop where I had a deliciously cold bottle of water.  The palm trees in the shopping park were plumbed in, spraying water as a fine mist all around them!  It was surprisingly refreshing walking through them, and the mist was fine enough for you not to get soaking wet.

After a quick stop-off at an AT&T store, I visited the National Atomic Testing Museum.  I hadn’t planned to, but it was opposite the AT&T store, so I thought, ‘why not?’  I have to say it was an excellent decision.  While very pro-American, and pro-nuclear (I lost count of the ways and times the pursuit and development of nuclear weapons was justified), it was also absolutely fascinating, and really well put together, with a good mix of historical timelines, artefacts from the testing site (which is in Nevada), genuine equipment and films.  I even got to test stuff with a geiger counter!

I enjoyed it so much, I bought my first (and so far only) Las Vegas souvenir, a genuine museum coffee cup.  I suspect it has been irradiated in a nuclear test blast.

After this, I took a walk down part of the Strip.  I saw all the famous sites of course: the Eiffel Tower, an Egyptian pyramid complete with Sphynx, a statue of Caesar, the ramparts of Camelot..

And I came to the conclusion, that Las Vegas is even more strange than I was expecting.   The boulevard is about nine miles long, but that short stretch contains grand majestic hotels, enormous glass modern skyscrapers, gaudy copies of (mostly European) landmarks and culture, buildings being constructed (the city is basically still being built, it has an air of not being finished yet), impressive and ginormous screens advertising the various acts (Cirque du Soleil etc) that appear regularly, and (what surprised me the most) dilapidated buildings, with rust-stained concrete and peeling paint (for example, opposite Caesar’s Palace).

That last building is more like the other parts of Las Vegas I saw.  While there are pockets of extreme opulence and grandeur, what I saw of the streets ‘behind’ the Strip was almost the exact opposite.  To be honest, it feels like a theme park, with all the people who keep it running living either side of it, in much less salubrious surroundings!

That said, it is of course spectacular.  But I have saved the best until last.. tonight I will be doing the Fremont Street Experience.  My hotel (the Golden Nugget) is part of that.. and I walked into the casino on my way back from the bus just now, and I actually said, ‘Oh wow’ out loud.  It was like being in a Bond film!  There were so many ways to gamble, I have never seen anything like it.

So I decided to split my Las Vegas post in two—one for the days’ events, and one later tonight with some pictures of my adventure this evening, which is, I think, going to be classic Vegas—loads of neon signs, loud rock music, food and beer everywhere, and a LOT of people walking around.  How could I not, when my hotel is part of it?!

And, tomorrow, it is Grand Canyon Day.