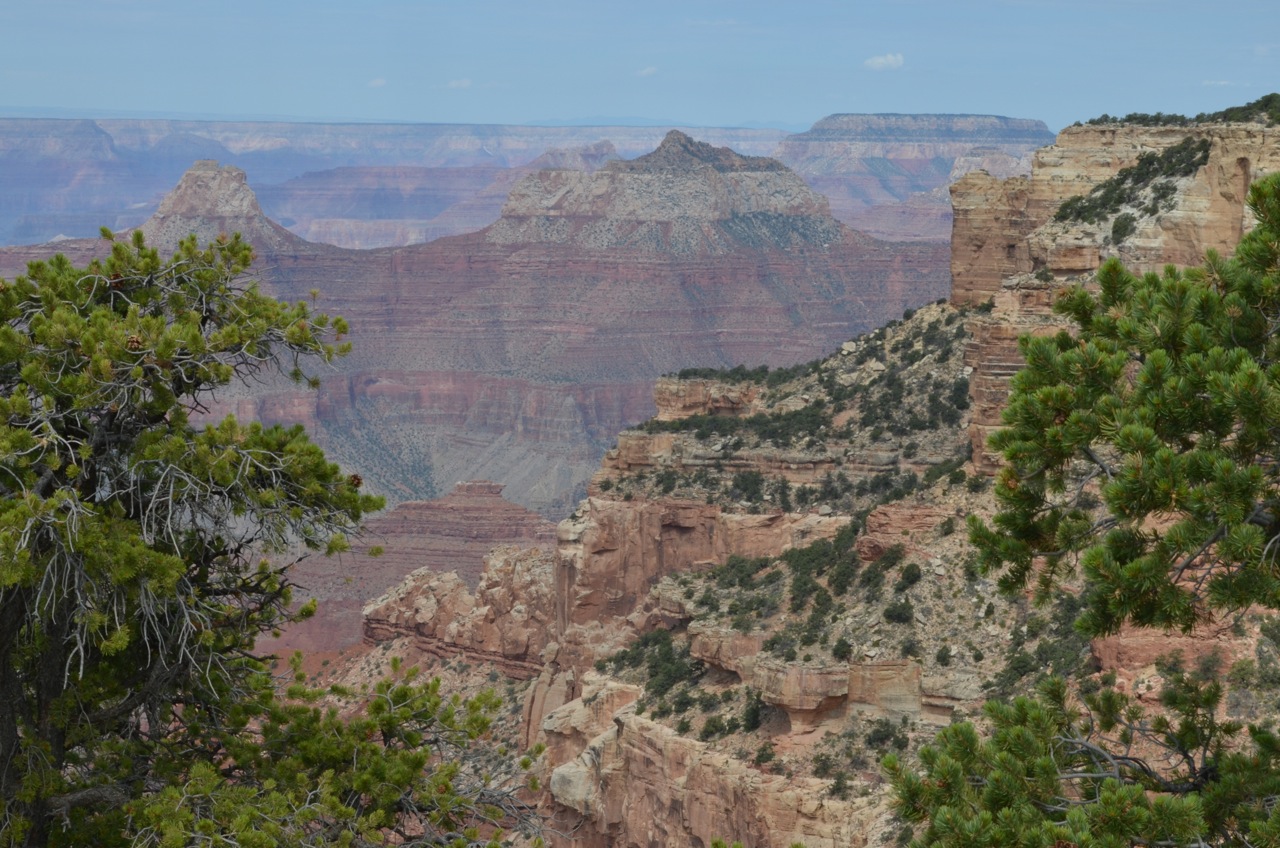 After getting up early for the sun rise, I decided I had time to go out of my way and drive to Cape Royal, 20 miles out of the way on mountain roads.  It was recommended in the guidebook as having stunning views of the Canyon—and it truly did.  The road itself through the forest was lots of fun, with switchbacks, and not too many good views to distract me!  Being so early, the sun wasn’t too hot, so I did the whole thing with the top down.. fantastic!  I then stopped off at Point Imperial, Cape Royal and then Roosevelt Point on the road back.

One of the things I suddenly had to deal with, walking to and from all these viewing platforms, is that 8000-9000 feet up, there isn’t very much air to breathe; I was feeling decidedly unfit until a) I realised it wasn’t me, it was the lack of oxygen, and b) even walking steadily I was still steaming past all the (stereotypically large) Americans and those with young families and teenage girls refusing to walk another step.

As I left the National Park, another incredible hail thunderstorm hit, with forked lightning darting either side of the road ahead of me.  Thankfully I had seen it coming so had put the top back up on the car..  The storm continued for over 50 miles (thankfully just rain, not hail), but then another started once I got into Utah!

Heading North in Arizona, the road drops an 4000 feet, and the temperature climbs with the drop, and the highway is great long stretches of dead straight road, with a slight left, and then another huge straight, as you leave the National Parks and head towards the border with Utah.  Just before the border with Utah is the town of Fredonia, AZ.  I honestly thought it would be the first time I would see some tumbleweed, but alas not.

I arrived at Ruby’s Inn, just North of the entrance to Bryce Canyon, at about 6pm (I think, crossing time zones all the time confuses me!).  I was absolutely shattered—I had probably been driving for close to seven hours due to the early detour to Cape Royal (worth it).

And as I checked in, I was reminded that I had booked myself into the ‘Cowboy Dinner Show’ just over the road from the Inn.  I was not in the mood for something like that.. but I stiffened my upper lip, and went over, mostly because I had already paid and didn’t want to buy my dinner twice!

And it was actually quite fun—they had a gun spinner on stage, and a couple of people doing lasso tricks, and then some whip cracking, before serving us BBQ food (very tasty) and then doing some Country music.  The Bar G Wranglers was the name of the band—the same people who had been doing the tricks early—and they were actually pretty good!

So today it’s off into Bryce Canyon, and then driving nearly five hours to Moab, my stop-off point before I leave Utah for good, and head into Colorado..