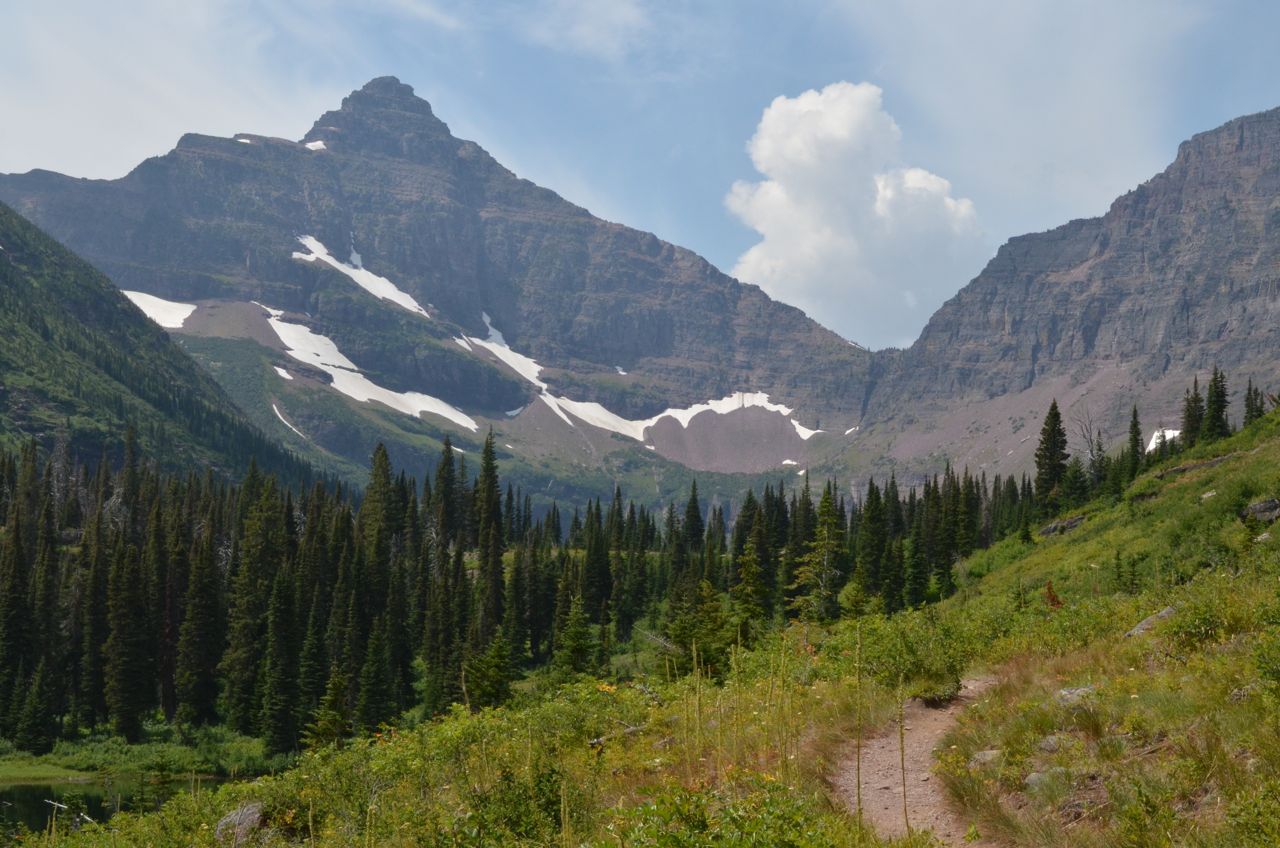 Today involved a big breakfast, a beautiful walk, and almost a bad ending..

I woke up in Glacier National Park, Apgar Campground, and packed everything up straight away.  It takes me about an hour to get up, wash, and pack everything up into the car ready to leave.  I then drove straight to East Glacier, a small village by the East Entrance to Glacier National Park, for breakfast.  I had pancakes, sausage, egg and syrup again.. and again it was delicious but I couldn’t finish it!

The slight catch when I set off, was the cloud cover.  You could tell how beautiful the mountains would be.. if they weren’t covered by clouds!

However, as I hoped and as I walked, the clouds lifted, and by the time I got to Upper Two Medicine Lake, it was lovely and sunny.  It was still quite chilly—this was the first walk I did wearing t-shirt and shirt—but it was perfect for walking in.  I was really pleased that I had found a really good way of using the extra day, making up for the disastrous tent episode at Lewis & Clark Caverns!

On the way back, I passed Twin Falls (two waterfalls in the same spot).  I then decided to take the long way round, on the South side of Two Medicine Lake.  I was well-rewarded, by an awesome wooden bridge that swished and swayed alarmingly with every step, and another pretty waterfall.

The walk was well worth it.  Although longer than my walk in the Rockies, it was much, much easier, as it took me just under five hours to complete.  My feet were still very sore at the end of it though, so I took my boots off and paddled in the lake.. it was bliss!

Then I drove to my next campsite, on the West Shore of Flathead Lake.  It was quite a drive, and when I arrived.. I couldn’t find the camp site!  I found the A and B loops, but not the Walk-in loop, which is where I had reserved a spot.  The maps I had were extremely misleading (it turned out).  I was going to the place they said, but there were no camp sites..

Unfortunately the camp hosts were nowhere to be found, so for over an hour I walked up and down, here and there, trying to find the blessed spot.  Eventually one of the volunteers showed up, and she told me where to find it.

It’s a lovely spot, right by the lake.. and so, all hot and bothered from all that extra walking (it must have been nearly two miles’ worth of tramping up and down), after I had put my tent up, I went to paddle in the lake to cool off.. and then decided to go the whole hog, put my swimming trunks on, and went for the most wonderful swim!

Like the shower at The Academy hotel, it wasn’t just the water, it was the situation.. it was exactly what I needed, to just swim gently up and down, cooling off and chilling out in the evening sun.  It was perfect.

I then found a place to eat.. with wifi (by accident).. and now the sun has almost gone, and I still need to pump up my airbed inside my tent etc (plus it’s getting late.. early morning tomorrow).  So I’d better head off, and hope my torch gives enough light to set up my things inside my tent :-).

Tomorrow morning I go white-water rafting inside Glacier, and then across the Going-to-the-Sun road.  Fingers crossed for clouds in the morning (less sun-burn) and clear skies in the afternoon, just like today!