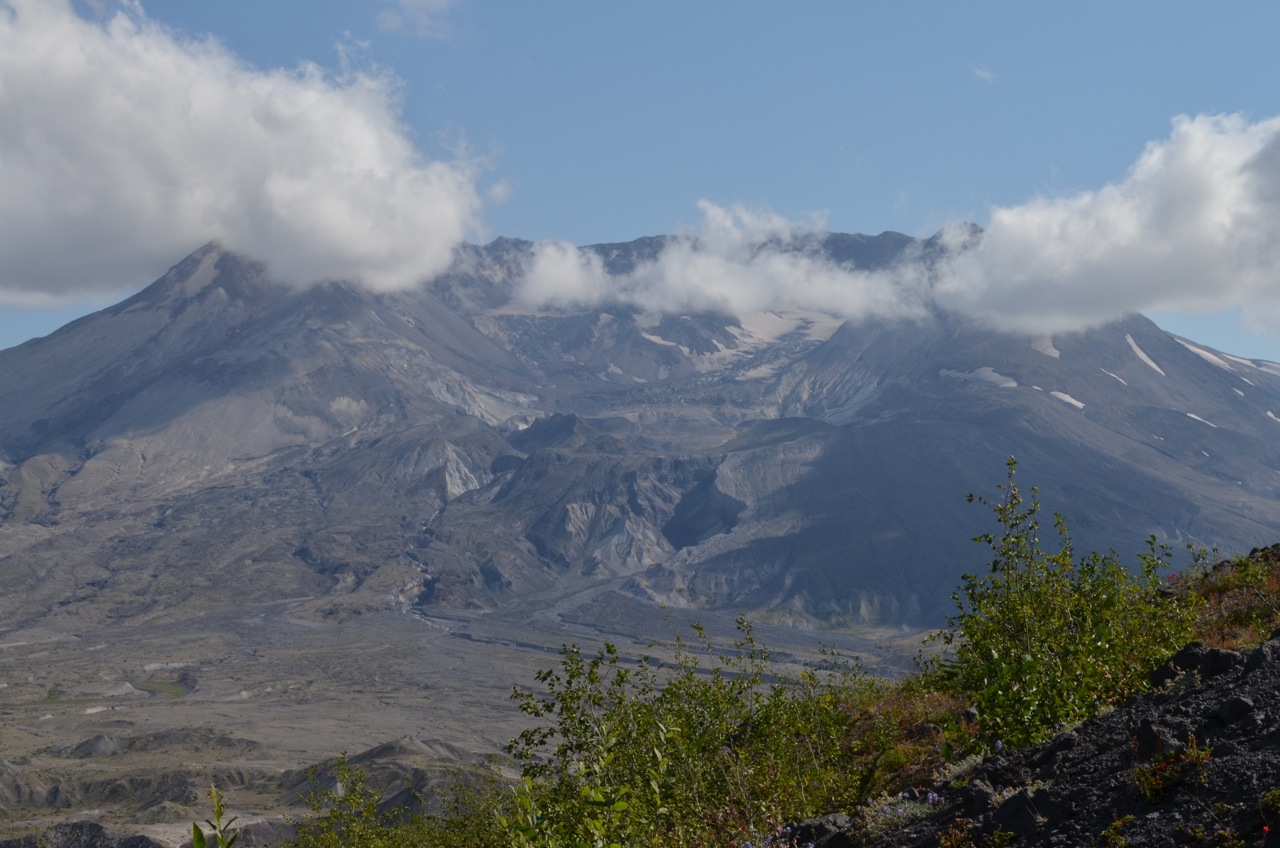 Monday was the first of two day-long roadtrips to the two most famous mountains in Washington: Mount St. Helens and Mount Rainier.  My companions were (Annie’s sister) Abbie and Jen, whom some of you met last year when they visited the UK.  The plan was for me to hike, Abbie to paint the mountains, and Jen to read.

Mount St. Helens is a fair drive from Issaquah, so we got up bleary-eyed and headed out in Annie’s car for the journey South.  Abbie and Jen had a wonderful experience on the drive, one that many Americans haven’t had: we listened to an hour of Test Match Special.  There was much sniggering (’Even on the cricket they talk about the weather!’), and general amusement.  And frustration (on my part) as it wasn’t very exciting, and we weren’t getting any wickets!  I was hoping for a snick to be caught at slip, or for one of them to hole a ball to mid-wicket, but it wasn’t to be.

As we drove through the hills / mountains surrounding Mount St. Helens we were all looking out of the window, trying to spot it.  We saw a couple of possibilities, but when we finally saw it, it was pretty obvious as it was missing half of the peak:

The landscape around the mountain is pretty bleak, as you would expect.  The eruption killed everything.  There is some vegetation around pockets of fetid water, and some hardy shrubs, but otherwise, it was completely silent.  No birds, no crickets.  No noise from the road.  It was astonishingly quiet.

A short while later we arrived at the Johnston Ridge Observatory, which was to be our base for the day.  The ranger on duty there asked me what town I was from while inspecting my driving licence.. I thought she was checking I wasn’t pretending to be someone else, but it turned out her roommate is from Rugby!

I left Jen and Abbie at the Observatory, and set off into the wilderness around the mountain.  The chap at the Observatory told me it was a 14-mile hike to the Loowit Falls (it wasn’t), but mostly flat (it wasn’t), and walkable in 3-4 hours (it wasn’t).  None of the hiking advice from the visitor centres has been anything other than excellent so far, so I set off at 11am, expecting to be back between 3 and 4.  I wasn’t.

The first part of the walk was pretty fun.  It hugged the mountain-side, and it was pretty hairy, as everything is basically covered in volcanic ash and dust, which isn’t particularly stable.

I think the warning sign part-way along the trail is one of my favourites so far!  In the background you can see Spirit Lake, which is absolutely enormous, but most of it was hidden from view along my walk, by the mountain you can see poking onto the left of the picture.

Two-and-a-half miles in I joined the Truman trail.  I was making decent time (under an hour to get to this point), so I was feeling confident of a 4pm finish, allowing for a good long break at the Falls.

A good third of the Truman trail was across the Pumice Flats, which look like sand dunes, but are in fact, hard.  Except, because they are made of pumice, you can dig your heel in a little way!  Clouds of pumice-dust followed me as I walked across, feeling like I was about to enter Mordor.. I could see up ahead, the lack of life and the overwhelming grey.

The landscape was punctuated by enormous boulders, thrown out by the eruptions (1980 and 1982), and countless smaller volcanic rocks.  I did pick up a small black rock to bring home, but it slipped out of my bag on the walk back, and I was in no frame of mind to care by that point!

It really did feel like I was walking through Mordor.  All it needed was some geysers to be steaming away.  The clouds surrounding the top of the volcano (which, I discovered later, were mingled with the steam coming from the lava dome inside the crater) meant it got darker the closer I got, and added to the sense of foreboding.  The clouds provided some welcome cover though: out on the flats it was totally exposed for probably 90% of the hike.

So far, the walk had been reasonably flat, but the soft sandy dust meant that quite a bit of it was tough going.  Imagine walking on sand and pebbles, uphill, for two miles.  And then I got to the sign to the Loowit Falls, saying, one-and-a-half miles.  I could see them, just, in the distance.  I didn’t take a picture because it was depressing how far away they were.  Not horizontally, but vertically.

I then proceeded to climb over 1000 feet, in about a mile-and-a-half.  That’s almost 1-in-5 the entire way, after already walking six-and-a-half miles of tricky terrain.  Let’s just say my legs and knees were a little sore by the time I reached the Falls.  I sat and munched on an apple and other trail food that had (thankfully) been presented to me before I left, despite my protestations.

Loowit Falls is actually on Mount St. Helens.  I wasn’t on an overlook, I wasn’t on the next peak.  I was sitting, eating my lunch, on an active volcano.  It was fantastic.  There was a lovely breeze coming down the peak, the sun was shining, and I was on the most comfortable rock in the world.. although that was probably just because it, rather than my feet, was supporting my weight.

Eventually I decided I had to head back.  It had taken me three hours to reach the Falls.  I was quite surprised, as based on previous walks, seven miles should have taken more like two-and-a-half.  But then, as I discovered later, I hadn’t walked seven miles!

The walk back was every bit as spectacular and bleak as the walk up to the Falls.

The last part of the walk involved a 600-foot rise from the Truman Trail to the Observatory.  Except, that was the overall gain in elevation.  The actual rise was much more than that, because the path was extremely up-and-down.  By this point I had walked fourteen miles, which on its own would have been by far the longest walk of the trip.  My legs—and for the first time my knees—were screaming at me to stop walking.  I started talking to them, encouraging them to keep going one after the other..

By this stage it was long past 4pm, and I was longing for a) a cold beer, and b) a hot shower, but more than both c) to stop walking!

Eventually I staggered back, barely able to move, and fell into the car, ready for the three-hour drive home!  I did a rough calculation from the map I’d been given, and came up with over sixteen miles as the total distance I had walked, but (wrongly) dismissed it as fuzzy-brain maths.

At that point I made an excellent decision, which is that we would stop for pizza along the way (partly because I was hungry, partly because I had a headache from wearing a baseball cap instead of my hiking hat, and partly because I just wanted to sit still and not move my legs for a bit!).

We finally got home at around 9.45pm, and I did calculate the round-trip.  Sixteen-and-a-quarter miles I had walked, with a total climb of just under 2000 feet.  No wonder my legs, knees, feet and ankles felt like they were about to fall off.

Still, I had walked up and onto Mount St. Helens, not just up the approach to it.  And, if I had realised how far the walk was, I might not have walked the whole way.