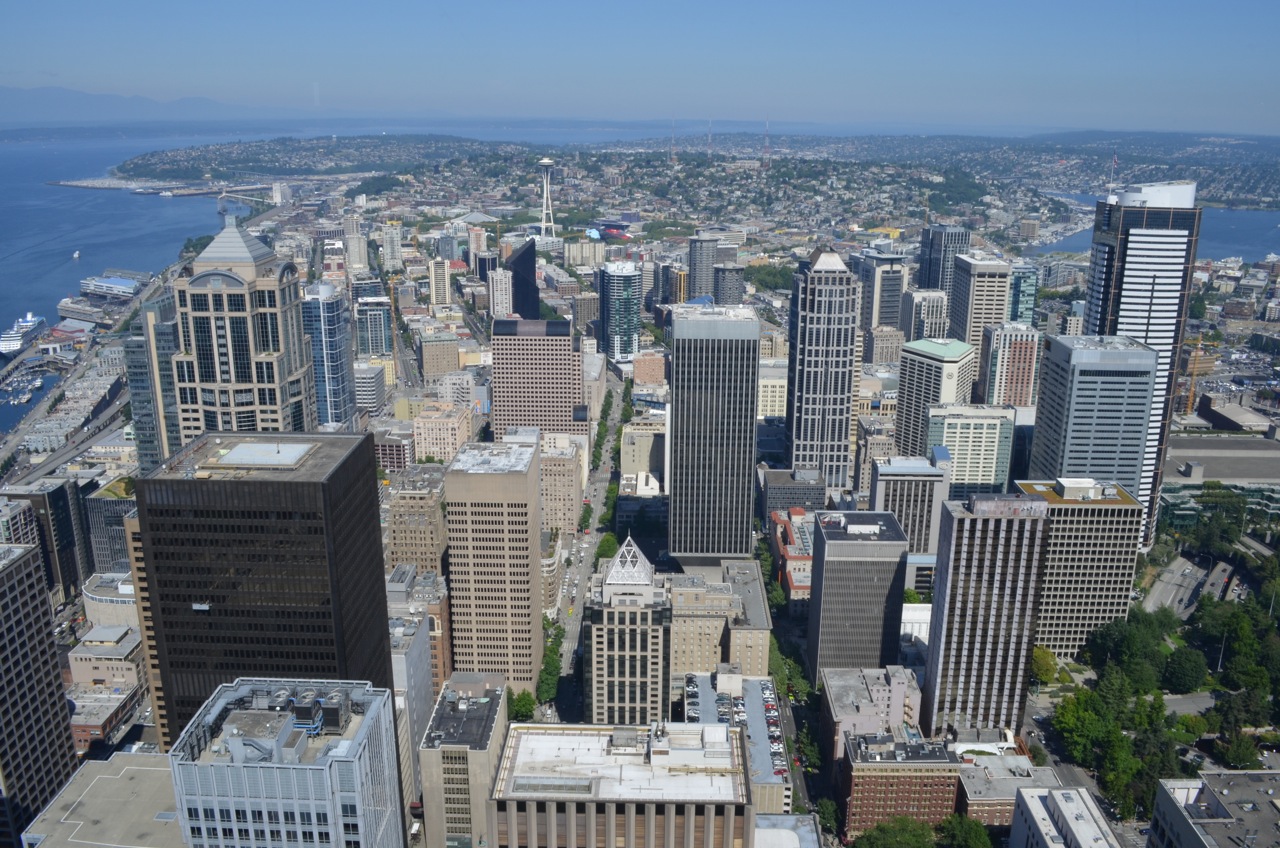 Today was a beautiful day.  It started out with a nice rest in the morning, listening to TMS and the rained-off cricket conversations, reading the news on my laptop, sorting through a few pictures, that sort of thing.  It was nice not to get up and immediate rush off somewhere in the car.

Once up, I headed into Seattle on the bus, for a bit of sightseeing.  I started out in the Columbia Center, the tallest building in the state, with a 40th-floor (39th-floor in British reckoning) Starbucks (the highest one in the city), followed by a trip up to the 73rd floor for incredible views of the city and surrounding area.

Here is the tower from ground-level, and the view from the 40th-floor Starbucks.  I had a great comfy chair in the corner to sit in and enjoy the view from.

The 73rd floor really was spectacular, especially on such a beautiful sunny blue-skied day as today.  The only clouds were wrapping the mountains in soft cotton-wool.  I could even see Mount Rainier (just), although I thought at first that it was a cloud!  The top is snow-covered, and so although the top was poking out above the clouds, it really did look almost like it was a cloud itself.  See if you can spot it in the last picture in this gallery:

After this, Annie and I met for lunch.  The Amazon.com canteen is exactly what I expected from a successful tech company: large, comfortable yet not regimented seats and tables, lots and lots of choice for well-priced, healthy food.  And of course, full of people in their late-20s.

Lunch was had at a Veggie Grill, which is 100% vegitarian, but actually delicious.  I never thought I would ever say that, but it truly was!  Hopefully the chain (which is quite new in the USA) will make its way over the pond.

Next on the menu was Pike Place Market and the Waterfront.  The market is now famous for fish-throwing, is on many levels, extremely colourful, busy and hot on a sunny day like today.  I have to say though, the most impressive part of the market was the incredible array and beauty of the flower stalls, at about a third the price of similar quality flowers in the UK.

At the waterfront, it was really good to breathe deeply the sea air.  I do love being by the sea, and the Puget Sound brings ferries, cargo ships and sea air right into downtown Seattle.  I had a very funny encounter with a local girl who was running, and came over to introduce herself while I was just admiring the view and the air.  She was asking me all sorts of questions about my trip, giving me advice on where to go for a good night out (!), but then the second I told her I am Church of England pastor (the word ‘pastor’ is understood, ‘vicar’ and ‘curate’ are not, and ‘priest’ makes people think I’m a Catholic!), she could not get away fast enough.. it was hilarious, and quite welcome as I was very happy to be enjoying the sea breeze on my own.

I then wandered around the shopping area hunting for sunglasses (I am a destroyer of sunglasses, two pairs in three weeks is I think a record), in vain, before riding the unfortunately named Seattle Lake Union Streetcar (it’s really a tram / trolley car, so it is therefore shortened to SLUT) up to the Museum of History and Industry, or MOHAI for short.  This is on the bank of Lake Union.  By this time of the day, it was really very hot indeed, so I found a bit of shade to write a couple of postcards, before watching the amphibious planes taking off and landing, and wandering down the pier between all the little wooden sailing boats.

After my third delicious coffee of the day, Annie finished work, so we caught the SLUT back downtown, and headed towards the market again (now closing down) so I could see the very first Starbucks coffee house, complete with the original Starbucks logo.  We didn’t get a coffee there: the queue was quite long, although when I had walked past earlier it was easily 60-70 people long, down the pavement outside the shop!

We were wondering whether to head over to the Seattle Center, which is where the Space Needle is, but given we were both yawning our heads off, we decided to head back to the house for the evening.  So we did, and I drove us back from the bus-stop.. in Annie’s car.. which is a manual, so I got to change gear the wrong way round!  It wasn’t as confusing as I thought it would be, actually, which is good, as that will be my means of getting out and about round the national parks up here.

Finally, complete with a mango and banana smoothie, the four of us watched the sun go down, before heading inside, and now (via a great chat with Annie’s dad, Steve, about ministry and faith, Einstein and preaching) up to bed.

It has been a long day, but a good one, making the most of the sun before the clouds return (the weather here is similar to English weather, it seems..)  Tomorrow normal service will be resumed: I will be hiking up a mountain again, after my ‘urban hike’ today, which was easily 5-6 miles.