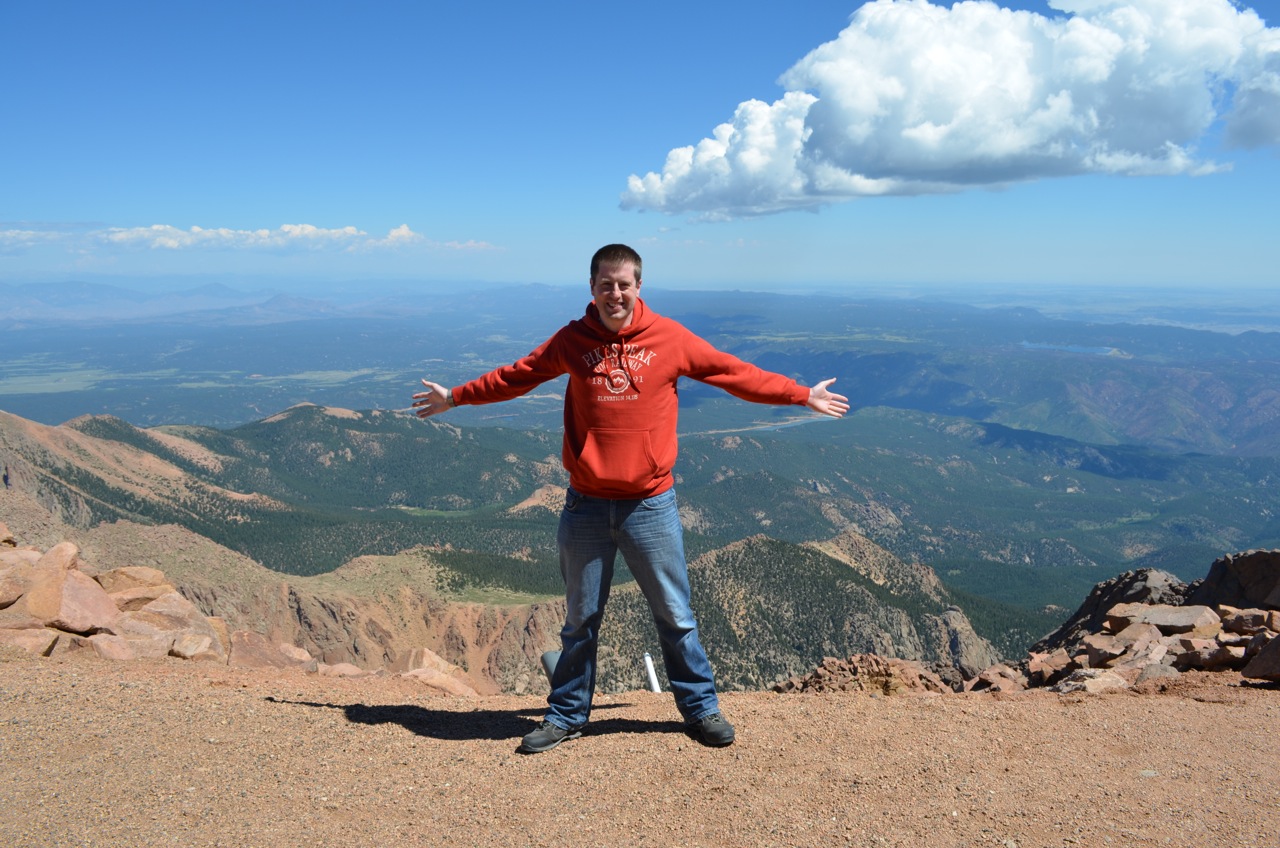 As I said yesterday, I moved the journey up Pike’s Peak to this morning, in order to avoid the rainclouds; there’s no point going 14,000 feet up if all you’ll see is cloud!  And my cunning plan worked, as there were no clouds to be seen for most of the trip.

The cog railway is one of the most popular attractions around here, and I can see why.  The journey up took around 50 minutes, and the views were spectacular—and would be even more so on a clear day.  There are a couple of lakes on the way up, thousands more trees, pink granite (only found here and one other place), some bighorn sheep, lots of small mammals, the odd deer sauntering across the track , and some terrifying climbs.

I was sitting right at the front, so had a great view of the carriage that was going before us, sometimes at impossibly steep angles.  When we paused on a 1 in 4 gradient, the conductor said that we at the front were two storeys higher than the people at the back!

I was sitting next to the Manitou Springs police chief, so made sure I was on my best behaviour.. and his family asked if I knew anything about William & Kate’s baby (though thankfully not if I were related).  I have decided to start telling people that I know them well, and that if it’s a boy they will call it Benjamin.  I think I need to work on my poker face though to pull it off.

Here are some pictures from the journey and at the peak itself (the last two on the way back down):

The pictures of me, as ever, were taken by a kind American fellow-traveller, and I returned the favour.  I have photographed all sorts of people on this trip!  I confess, I did do a photo exchange with an American couple, but the gentleman who took the one of me wasn’t a very good photographer, and I wasn’t happy with it, so I was wandering back to the summit sign to see if anyone was still about, when I ran into Sarah.  Thankfully she did a much better job!

(As an aside, by getting to the top I went one further than Mr Pike.. poor old Mr Pike never climbed to the peak that bears his name.. it was named by the people who did, who were inspired to climb it after reading about his failed attempt in his journal.)

After the descent, I drove over to the Garden of the Gods.  I have to say, I was a little disappointed at first, probably because I have been spoiled by the red rock canyons of Zion and Bryce Canyon National Parks.  But I sucked it up and decided to do the long hike on the map—I say ‘hike’, but you know you’re not in for much excitement when round the first corner you meet someone pushing a buggy.

And then the rain came, and lots of it.  I have to say I was getting quite grumpy at this point, as I was on the other side of the park when it started throwing it down!  The map got drenched, and I took a wrong turn, and actually ended up taking my bearings right next to a car in which sat Sarah, who I’d met at the top of Pike’s Peak, and the ladies she was travelling with, one of whom had been to the Garden before, and so was able to take us on a much more interesting route, through the centre of the park instead of round the edge.

And the sun came out, and with company I cheered up a lot (the three of them even ended up taking me out to dinner at a Chinese restaurant, where I had strawberry chicken!).  Here are some pics from the centre of the Garden:

So it wasn’t too bad after all that.. lots more fresh air which is doing me the world of good, blowing out all the cobwebs, helping me forget all the stresses and strains of normal life.  Which is one of the main reasons for coming on this trip!