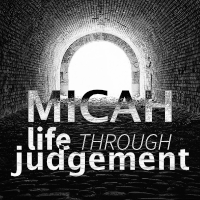 The text of the sermon is shown below, and can be downloaded as a PDF here.

Today we begin our Advent series – yes, I know it isn’t Advent until next Sunday, but it was hard enough squeezing Micah into five sections, let alone four, so we’re starting a week early.

Advent is traditionally a time of getting ourselves ready – though not for Christmas: for Jesus’ return. It is a time for reflection and repentance – so an Old Testament prophet seemed the ideal companion for the next few weeks.  Prepare to be challenged – if Micah doesn’t make us uncomfortable, we aren’t listening to what God is saying to us through him.

Micah was a country boy, from a place about 20 miles south west of Jerusalem.  He prophesied about 700 years before Jesus was born, and was ignored by Israel’s leaders – until King Hezekiah listened and led God’s people back towards holiness.

In Micah’s day, God’s people were rich and complacent.  Their wealth meant they didn’t need God, so they indulged the false prophets who told them what they wanted to hear.  They ignored injustice, acting as they pleased while claiming nothing bad would happen.  They went through the motions of religion, honouring God with their lips but not changing the way they lived and walked to be in step with God.

Micah couldn’t stand it – and I don’t blame him.  He describes himself as a farmer going to harvest fruit in the summer, but finding no grapes in the vineyard and no figs on the tree.  He looked for faithfulness among God’s people, and found none.

It’s a grim and damning description of God’s people.  No wonder God was angry and promised punishment.

It’s hard when the Bible talks about God’s anger, wrath, and judgement – it does that a lot, and in the New as well as the Old Testament.  We need to be told how serious sin is – because we are so good at justifying ourselves, at focusing on the bits of the Bible we like and ignoring the bits that challenge.

But also we need to have in mind that the reality of sin and the danger of punishment isn’t the end of the story.

The name ‘Micah’ means ‘who is like God’ – and he ends his book with these words:

Who is God like you,
who pardons sin and forgives the transgression
of the remnant of his inheritance?
You do not stay angry for ever
but delight to show mercy.

The message of Micah is this: don’t pretend sin isn’t serious and don’t pretend we aren’t sinners.  And don’t think we can sort it out ourselves: only God can redeem us, only God can save us, only God can forgive us.  The good news – the great news – is that he promises to forgive everyone who turns to him and, as Micah says, to hurl all our sin into the depths of the sea (7.19).

I wonder – do you ever think about what you might do or how you might feel when Jesus returns?  Is there a question you long to ask?  A person you long to see again?  Healing you desperately want to receive?  I can’t wait for the daily struggle to be over, to see Jesus face to face at last.

The Lord is coming – that sounds like good news.  But in Micah’s prophecy it is very much bad news.  It all starts to get a bit heavy in verse 4 as he describes mountains melting and valleys splitting – that sounds rather like volcanic eruptions and earthquakes to me, which are not normally good news.

Imagine if you will, a day when banks had branches and you had to visit them to pay in cheques and withdraw money.  I know it’s madness to suggest such a time, but bear with me.  Imagine you’re in the queue waiting patiently, and suddenly a group of people with tights over their faces barge in and start robbing the bank.

Out of the corner of your eye you see a blue flashing light and the word ‘Police’ on the side of a car that pulls up outside the bank... is it good news or bad news?

It’s good news for you, but bad news for the bank robbers.

God’s people – those who heard Micah’s prophecy – thought of themselves as the innocent ones, so heard ‘the Lord is coming’ as good news.

Except Micah’s punchline was that they – God’s own people – were more like the bank robbers, which means God’s impending arrival wasn’t such good news after all...

All this is because of Jacob’s transgression, Micah says, because of the sins of the people of Israel(1.5).  This is where it starts to get really heavy.  Micah describes some of the sins of God’s people.  They’ve been worshipping things that aren’t God (1.7) – whether physical idols made of wood and stone, or other idols like power and wealth and sex, it doesn’t matter.  They have been jealous and greedy, coveting and taking what doesn’t belong to them, defrauding and exploiting other people (2.2).  Not only that, they are proud of it all (2.3).

The plague began in the Northern kingdom of Samaria, but has spread to the Southern kingdom ofJudah – even to Jerusalem itself, the centre of God’s presence and worship (1.9).

I’ve been staring at these words all week and friends, I’m not sure they only apply to God’s people there and then.  The trick of the West has been to move our exploitation to other countries where we don’t have to see it any more.  Our idolatry of power, wealth, and sex is so embedded in our culture that we don’t even realise when we worship desire and created things instead of God.

Sin means moral failure, missing the goal or the target, like my pitiful attempts at archery on a friend’s stag do.

Transgression means breaking trust, betraying a relationship, like a country going back on a treaty signed in good faith.

Iniquity means behaviour that’s crooked and twisted, like a piece of damaged metal that needs hammering back into shape.

(The Bible Project has three excellent videos on those words.)

Moral failure, breaking trust, twisted behaviour – that’s Micah’s diagnosis of God’s people.  Is it any wonder that God promises to destroy their idols (1.6), to bring disaster (1.12), a conqueror (1.15) to his people as a punishment?

Do you think that’s what God wanted to do?  Of course not!  He didn’t want that any more than Micah, who went about weeping, wailing, barefoot and naked, howling and moaning (1.8).  These Old Testament prophets were quite the bunch.

God called his people to be a blessing to the nations.  He gave them the Law to teach them the best and the right way to live.  He provided leaders, taught them wisdom, sent them prophets to call them to repentance and faithfulness.

Two weeks ago we heard about Jonah preaching to the Ninevites.  They listened, they repented, and they lived; friends, that’s what God wants.  Ezekiel 18.32 says: I take no pleasure in the death of anyone, declares the Sovereign Lord.  Repent and live!

God doesn’t anyone to be punished.  But, if we stubbornly refuse to listen, if we insist on ignoring the warnings – and there are many in the Bible – we will have to face the consequences of our rebellion against God.  That is justice.

This plague of sin is incurable (1.9), you cannot save yourselves, God says to his people (2.3).  Why not?  Because the problem is us; we are the problem; our hearts are broken and damaged.

You may as well ask me to grow enough vegetables to feed the church – it isn’t going to happen, we’re going to end up very hungry.

You may as well ask someone who can’t swim to jump off a boat into the sea and make their own way to shore – it isn’t going to happen.

You cannot save yourselves, God says – are you feeling depressed yet?  Uncomfortable?

You cannot save yourselves, God says – but that is not all God says, it is not his final word on us hold up Bible to show there is a lot left still to come.  We cannot save ourselves – so our greatest need is for someone who can save us – we need a Saviour.

And a Saviour is precisely what God gives us.  You can’t do this, God says, but I can.

Micah was speaking into the situation God’s people faced 2,800 years ago as Assyria prepared to invade their land – but he was also seeing the coming of Jesus.  In fact, Micah 5 is often read during Advent because it is quoted by Matthew:

But you, Bethlehem Ephrathah, though you are small among the clans of Judah, out of you will come for me one who will be ruler over Israel, whose origins are from of old... He will stand and shepherd his flock in the strength of the Lord... and he will be our peace.

What we cannot do for ourselves, God does for us.

1 John 4.10: This is love: not that we loved God, but that he loved us and sent his Son as an atoning sacrifice for our sins.

Revelation 1.5: To [Jesus] who loves us and has freed us from our sins by his blood... to him be glory and power for ever.

Romans 5.8: God demonstrates his own love for us in this: while we were still sinners, Christ died for us.

Do you see?  God’s love is not about pretending we’re ok and that our sin doesn’t matter; God’s love is about dealing with our sin, once and for all, so that those who repent can be forgiven.

Friends, I don’t want us to water down the gospel, to cherry-pick the bits of the Bible that don’t challenge or offend.  To do that is to empty it of its power and beauty, of the truth we need to hear.  Following Jesus is costly: it means living his way not my way, dying to ourselves so we can live for Jesus.

We all need a Saviour because we are all bruised and broken and we cannot save ourselves.  Instead we need to repent of our sin every day: turning to find who we are in God not in our desires, turning to receive forgiveness from God, and beginning the process of being healed and transformed by the Holy Spirit.